The Snak Shack is a Ridge institution. It’s remarkable that it’s taken me more than two years to feature it in the Food Safari. Outrageous. Shameful.

So what drew you to the Shack after all this time, I hear you ask. Sadly, it was the parlous state of affairs at the bowlo. The words “under new management” never instil great confidence, and the reports I was hearing were not good. Wednesday tea at the bowlo is an absolute given: the food is unpretentious and good value. But times change. K and I went in. We looked. We turned around and left.

Also, the Shack also has a new menu.

Again, plain food, all the usual suspects. Unfortunately they’d had a run on parmies the night before (someone had ordered 10!). And they were out of the pot pie. And the prawn, and maybe the vegetable pasta was off too. But everything else was on!

K went for the carbonara (which had a chicken option; she declined) while I lashed out on the steak. I could have had T-bone but went with the Scotch fillet.

You can dine in at the Snak Shack but K and I decided we’d like to take ours home. Yes, there is a kind of an atmosphere in the Snak Shack. But, well …

It must have been a really bad night at the bowlo because two other Wednesday night bowlo die-hards blew in. They promised me a report on their crumbed fish and bangers and mash. I am still waiting. Michael. Jacob. Still waiting.

The tucker was served in good time and K and I dashed home. It was a hot night and so, even though it was a steak, almost anything seemed possible. Gin and tonic? A James Boag? A full-bodied red? After browsing the cellar for some minutes I settled on a 2016 Brancott Estate sauvignon blanc, which I had wisely sourced from the bowlo bottle shop on a previous expedition. We decanted the grog and tucker, got out the dijon mustard, and ripped in. 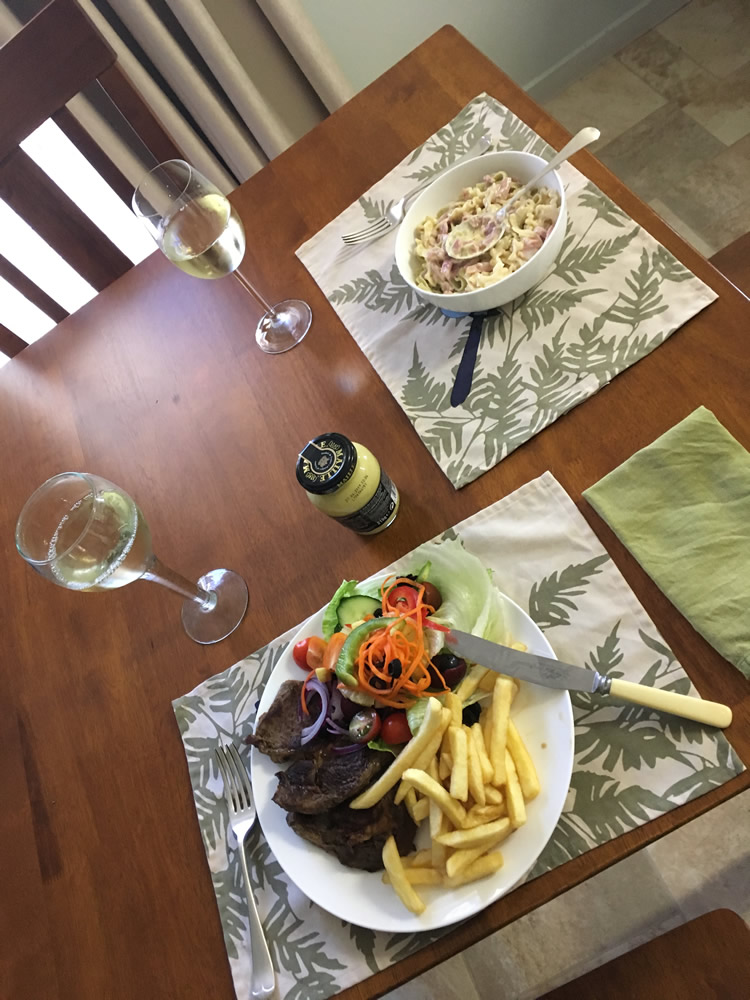 Woah there, I hear you cry! Surely you wouldn’t just serve up a feast like that without dropping some monster beats? Here I give a wry chuckle. Of course not. What else but some of Memphis, Tennessee’s finest: Booker T, Eddie Floyd, Shirley Brown, Jean Knight, Mel & Tim. Oh yeah. Ohhhhh yeeaaaah.

Can there be anything better than good food, decent wine, outstanding music and excellent company for a Wednesday night? I say: “No”. There cannot. This was grand.

If you are looking for a well priced, filling and unpretentious meal that delivers on its promises, go no further than the Snak Shack. But ring ahead if you want a parmie; they do run out!