A change came through on Monday. In other places this was a cool change: blustery winds as the front moved in; a sharp, torrential downpour; steaming bitumen and pavements; a brief plunge in temperatures that caused those abed to pull up the cotton blankets that have lain rumpled and unused for most of the season.

In the Ridge we got the bluster, and little else other than a houseful of grit blown in from under the door or through the fine mesh of the fly screen.

I went out in it around 11 o’clock at night.

Trees arched and strained and Fantasia Street was blurred in a veil of dust that stung my eyes and pasted itself to the sheen of sweat on my face and neck. It was weirdly and unpleasantly exhilarating.

I was struck by the light. I’m a night walker, mostly. I do sometimes get up early to watch the pre-dawn behind the water towers. 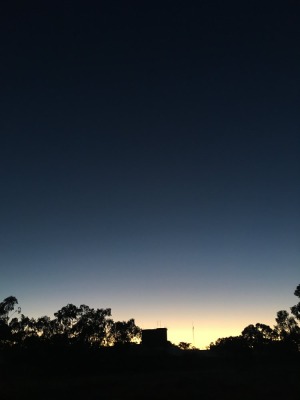 But night is my preference. The light puts me in mind of those paintings of Fifties American diners by that man. Rothwell? Rockwell? Norman Rothwell? The beautiful old Miners Co-op Store (possibly the most gorgeous building in the Ridge) oozes nostalgia and a modest – almost timid – kind of melancholy at night. I want to hug it.

I can’t remember the man and so I find out the usual way. Turns out it’s Edward Hopper. (Not even close.) And the painting I have in mind is Nighthawks.

I’m told by the Big Wiki that “In keeping with the title of his painting, Hopper later said, Nighthawks has more to do with the possibility of predators in the night than with loneliness.” I don’t meet many nighthawks or predators during my walks in the Ridge. They’re probably there all right; they’re just good at avoiding me. So most of the time I wander street after street, my only company a foraging pig dog.

I take pictures as mnemonics to help me with my writing, but sometimes they come out telling a better story than I can. Phone booths, for example. How do they manage to exude so much pathos? Is it the subtle reminder of loved ones far away? Of missed calls and sliding doors that led to lives that could have been?

The post office is very Hopper, perhaps not visually but in the homespun coziness it exudes. The gift card sign. The public notices. The thermometer, with its protective guard.

These ATMs are more Blake’s Seven than Edward Hopper. They’re about as mod as you’re going to get on Morilla Street and yet to me they look like something a set designer from a low-budget BBC show in the Seventies might have come up with when their brief was to create “a futuristic money machine from the far distant future!” Woot woot.

The back of Khan’s brings me back to more familiar Hopper territory. Unlike Hopper’s paintings my photos are relentlessly unpeopled. They’re sparse and harsh. The temperature could be minus 10 rather than plus 30. 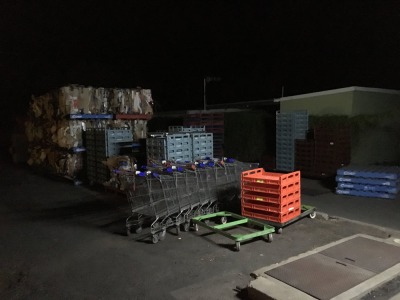 Thankfully the jolly “power straddle” of the street lights next to the water bowser cheered me up. How can you not feel happy looking at that?

The mood didn’t last, of course. It never does. 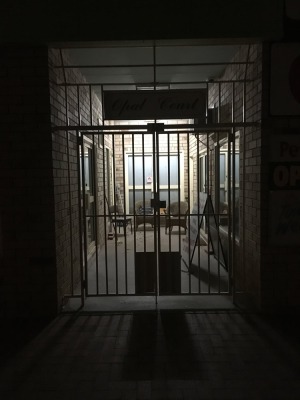 But if things were too much of a Hopperian dystopia, there’s always the bore baths to wash away those nighthawk blues.

It’s no Fifties diner but its sparsely cluttered geometry always fills me with an unidentifiable contentment. A couple of grey nomads from South Australia were my only company, she lapping the pool and squealing in pleasure and shouting “Come on in, honey! It’s goooorrrgeous!” and he muttering in knee-length shorts on the steps, refusing to go any further than ankle deep.

It was a scene that Cheever or Carver or Hemingway would whip into a short story in an instant. But there were no nighthawks or predators here. Just me, and those two, under the basking glow of the night lights.

7 thoughts on “Homage to Hopper”