When Fancy Folk from Out Of Town land in the Ridge, they will often ask their host: “Where can one dine out in style?” If your guests are on a budget there’s the Bowlo, and if they’re looking for something with a little more atmosphere there’s the bistro at the pub. But if you really want to roll out the red carpet there’s only one place to go: Bruno’s. (Possessive apostrophe optional.) 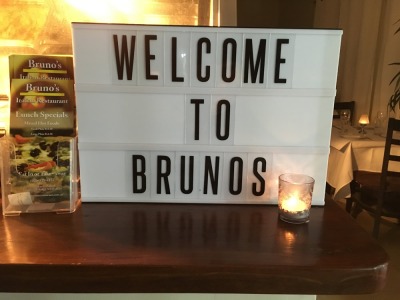 The first time I came to Bruno’s I was deeply tickled to receive, with my menu, a drinks list. But it wasn’t called a “drinks list”, it was called the “alcohol menu”. It makes me smile every time I see it. When the waitress comes to take my order I’m always tempted to say, “Don’t think I’ll bother with solids tonight. I might just work my way through the alcohol menu, thank you.” 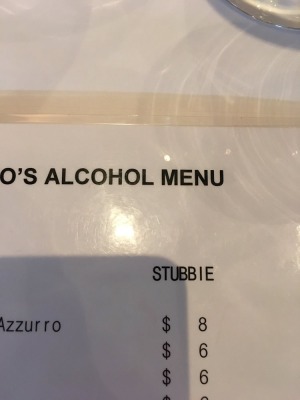 Bruno’s is nicely presented. It has a little chained off area that leads into a tobacconist, but other than that it’s like any Italian restaurant: a bit loud and clattery, a bit heavy on the Dino and Sinatra. But that’s ok, it’s what you expect and it’s what you get. Nobody wants nasty surprises in their Italian.

The fancy folks from out of town in this occasion were children’s book illustrator Craig Smith, and publisher / artist Erica Wagner. Of course, if you’re going to take an illustrator to a restaurant with paper tablecloths, only one thing is going to happen.

I mean, come on. I don’t start writing blogs on the tablecloth!

I was taking this photo when I had one of those Homer Simpson “D’oh!” moments. It’s a food safari! And I’d been enjoying myself, and the food, so much that I’d forgotten to take pictures of it. Here’s the leftovers of what was a pasta dish with prawns and a creamyish tomato-y sauce called, I think (yes, it’s all a bit vague) penne monte mare, or something like that. Does that sound right? It was good!

I think we all drank a bit too much, or maybe that was just me. But at least I didn’t go tearing up the tablecloths.

Apart from Wednesdays at the Bowlo I never ever go out to eat in the Ridge. And yet, two nights later, I was back at Bruno’s. Unprecedented! The fancy folks included another illustrator and yet this one showed great restraint and did not draw on anything.

We started off with the pizza base with cheese on it, and fortunately Trevor reminded me to take a picture. We then had more pizzas – a supremo and a diavolo – and a Greek salad but I forgot to take pictures of those. They were good too.

However! What did I say about not wanting any nasty surprises? My fancy out-of-town friend was perplexed when he went to add seasoning to his salad. In my world, and his, there’s an unspoken agreement between people who go to restaurants and cafes, and people who run them: salt comes out of a pot with one hole in it, and pepper comes out of the pot with lots of holes in it. This situation, the one pictured below, caused great consternation and a distressingly large amount of discussion. It was like turning on a tap expecting cold water to come out but getting hot custard. Pepper pot with ONE hole? Salt with LOTS OF HOLES and a label? Woah! Just not right, Bruno’s!

Thankfully we regained our equilibrium. Steve got the afogato, with kaluah. It was already late at night and I warned him against it but he claimed to know what he was doing. He was wrong and was awake for a long time. But the afogato was very, very nice indeed (I had a bit).

BTW, here’s a picture of Trevor struggling to understand which pot to shake over his salad. Can you see how perplexed he is? 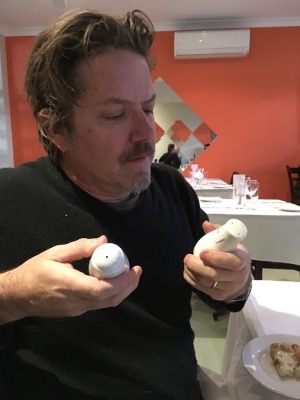 On Sunday morning we went to Morilla’s, the cafe next door to Lost Sea Opals. This deserves a food safari of its own, but who can be bothered. Anyway, it was all very good (I know I’ve described the food in both places as “nice” and “good” which is massively lame but I’m typing this late Sunday arvo during the Tigers – Eels game and I’m not paying as much attention to my writing as I should do. Bite me.) 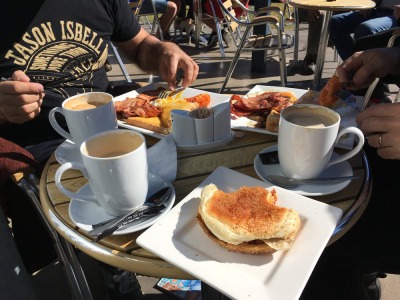 The point is this: at Morilla’s they have salt pots with ONE hole and pepper pots with THREE. Look at the picture of Trevor, Bruno’s: he is now content and the social contract between customer and cafe owner has been restored.