The place where I grew up in northern England was home to about 2,500 people, seven pubs and The Club. The pubs were all of a type: open fires, dartboards, lots of singing. It was the 1970s but, apart from the funny haircuts and decimal currency, a body from the 1870s would have felt totally at home.

The Club was different. It was attached to the shoe factory where my mam worked, as did everyone else’s mam. There were only two reasons why young folk went to The Club: (a) all the pubs were shut; or (b) there was a “do” on – a wedding reception, a birthday, a wake. There would be sandwiches in summer and, in winter, pie and peas or hotpot with slabs of black pudding.

I’m not much of a club person and each time I went through the doors of The Club I felt like I’d surrendered a little of my soul. The vampire glare of the strip lights, the dull chug of the fruit machine swallowing another pensioner’s loose change, the curling carpet tiles and sticky lino.

But clubs are where the teachers’ union holds its meetings, and so on Thursday I found myself and the rest of the Lightning Ridge branch driving down the corrugated dirt road to Colly. It was my idea, taking the back road, because it’s about 20 minutes faster than going the long way via the bitumen. Unfortunately this time-saving venture was not well received by the branch secretary  who sat – rattled, deafened and grim-faced – in the back of my Subaru “shit box”, occasionally barking “What?” and “I can’t bloody well hear you back here!” Oops.

The inside of the club looked like a bazillion clubs the world over. Kino scrolling away in the background, Thursday night football on the (not so big) screen.

To the left was a dance area and stage and, oh lovely!, and old pianner at the side, next to the faded picture of a youthful QE II. 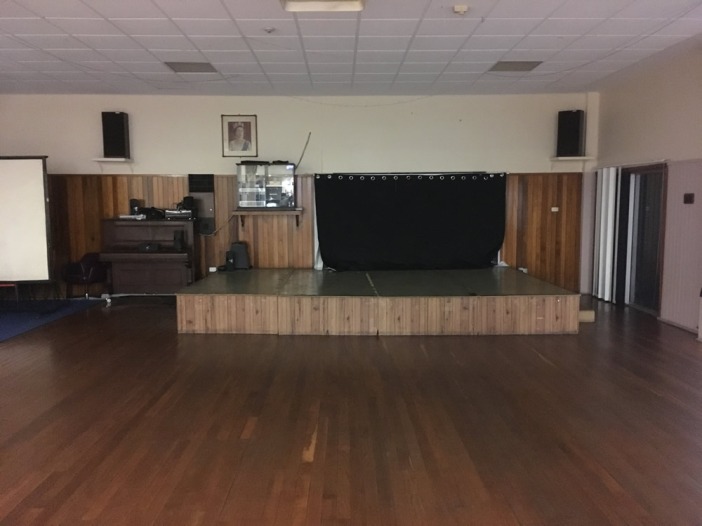 The Colly Club’s proper name is something like the Collarenebri War Memorial Bowling Club. There are several honour rolls to those who served in various conflicts. So many of them. Colly must have been quite the place back in the day.

Or maybe never. This 7-minute video by rail enthusiast IDU Curiosity tells the story of how Colly was dudded by Walgett over a century ago. The two towns were growing at similar rates, but there was a race on to see who could get the critical rail infrastructure first. Due to financial finagling, Colly’s railhead stopped nine miles short of town, while Walgett’s made it all the way in. Which is one of the reasons why Colly fell into decrepitude while Walgett went on to become the wealthy, bustling and successful metropolis that it is today.

The honour board stood in stark contrast to the awards cabinet. I’m guessing Colly hasn’t produced too many champion bowlers in recent years. Or maybe they were being polished?

We went to the meeting place, a glassed-off area next to the dance hall. It was hard to imagine exactly what this glassed off area would be used for; it was long and narrow so we were strung out like peas in a pod. But it did have the world’s funkiest seating. 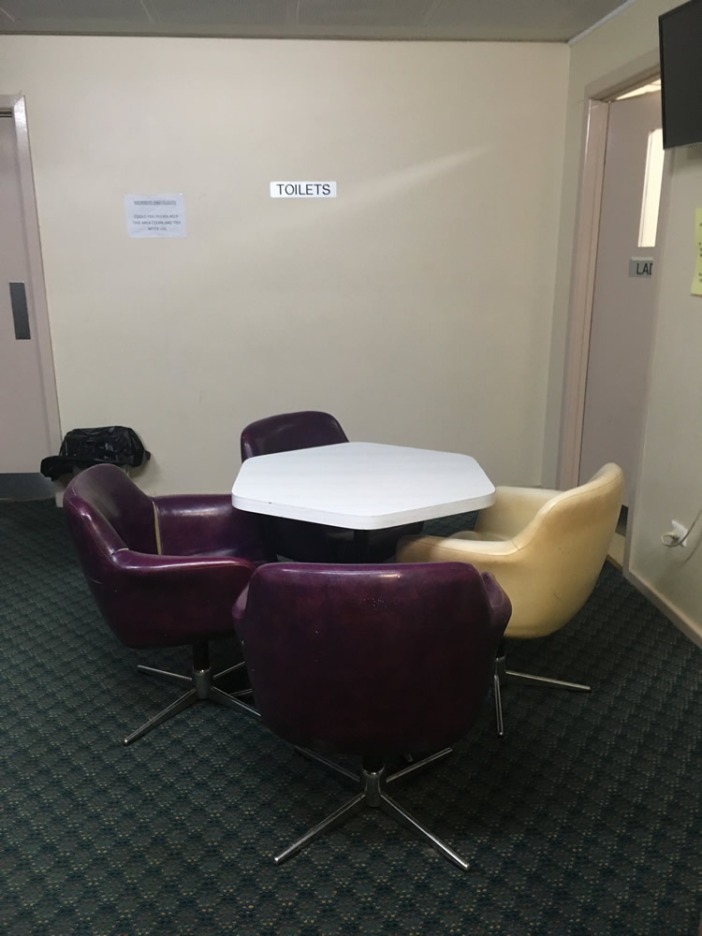 The good folk at the Colly Club had opened up the kitchen just for us. They even brought out little pizzas while we settled and got the meeting under way.

Being the designated minutes-taker I deemed it necessary to have something substantial to see me through so I went for the lamb cutlets. They came with mash, chips and vegetables.

I wonder if the cutlets came from the Colly Butcher? I want to go there and blog about it one day as the butcher in Colly is legendary. At Christmas it produces eight trillion hams that get shipped out all over the Western Slopes. Why Colly should happen to have a globally famous butcher is beyond me, but they’re doing something right. The cutlets were grand.

As you can see from the picture above, the general colour scheme of the food was, like the club itself, brown and yellow. B went for the mixed grill. It would have nobbled me but he has a big frame and tackled it manfully. (This picture is deceptive. It was frighteningly bottomless: there were at least 3 metric tonnes of meat concealed beneath that steak. Each time he ate something, two new pieces of something else magically took its place.) 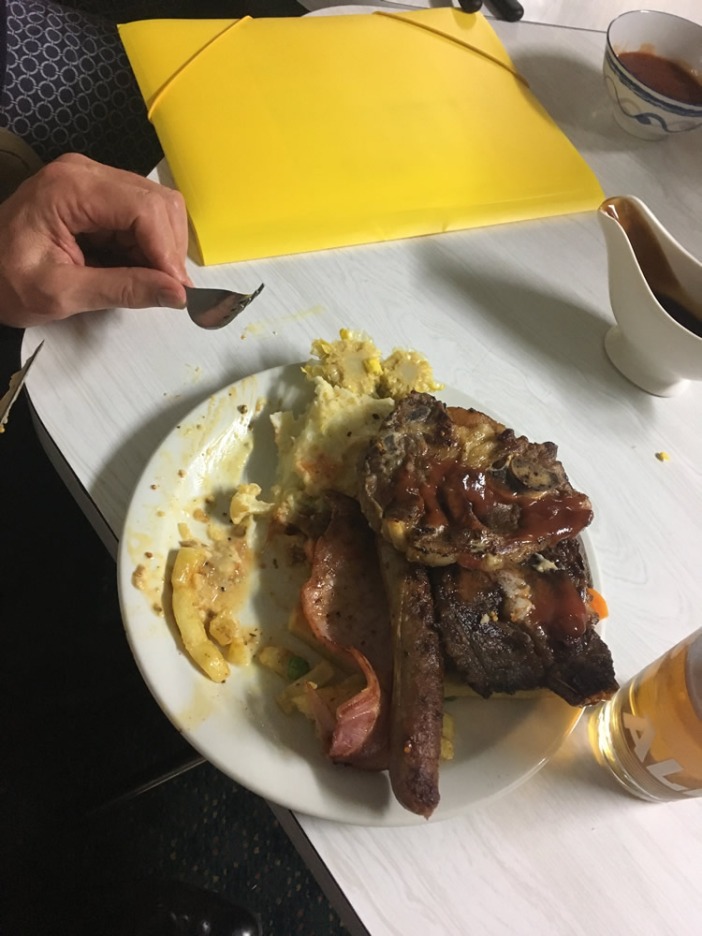 The most difficult blog posts to write are those about things like lamb cutlets at Colly bowlo. What am I trying to do or say, and why? I can be a rude and tactless person at time. I take pictures of things with my phone because they frame themselves and I feel compelled to capture them, but a picture like the one below can come across as some snarky piss-take.

Yes, it does make me smile. And ache at the same time. The honour board, the empty trophy cabinet, the Kino scrolling ever onwards like time itself regardless of those who come and go before it.

The Club in my home town, the one by the shoe factory, makes me heavy and warm at the same time in the same way. Is The Club my first port of call when I go back to Cumbria? No, it’s not even second or fifth or ninety-ninth. But I’ve made dozens of memories beneath its strip lights. It’s where we had the do after mam’s funeral, and dad’s too. A stranger would wander in there in see nothing but the vinyl chairs and curling carpet tiles and neglected honour board.

The Colly Club mightn’t be all it once was, when the keys on the piano were being hammered and the dance floor was full of the men and women whose now forgotten names appear on the honour board. But I was welcomed warmly there, and treated with the cheerful, egalitarian respect so rare in the modern world but so common in these parts. I’d gladly eat there again.

But, at the secretary’s silent insistence, I did take the bitumen route home.